Rotimi Is ‘So Proud’ to Release Debut Studio Album ‘All or Nothing’: ‘I’m Stepping Into My Time’

After earning his first-ever RIAA gold certification with his Wale-featuring hit song “In My Bed,” singer and Power star Rotimi is giving his all in his new album, All or Nothing, out today (Aug. 27) on streaming platforms.


“It’s a blessing,” he says of going gold with the Afrobeats-infused single. “Especially knowing my story isn’t the most simplest, playing a character on TV and being an actor makes it harder for people at times to say, ‘Oh wow, he’s really an artist.’ To get that first [RIAA gold certification] is validation of everything that me, my team, my family and everyone believes in.”

The New Jersey native Nigerian artist’s all-new album comes nearly two years after the December 2019 release of his rhythmic EP, The Beauty of Becoming. That set’s lead single, “In My Bed” became an international sensation and peaked at No. 15 on the Billboard Top Triller Global chart. The track also peaked at No. 12 on the Hot R&B Songs chart, where it remained for 12 weeks. “The beat, Afro-pronunciations and cadence were the perfect storm on ‘In My Bed,'” he says. “We got way more [hits] to make and this is the best time for All or Nothing. It was always a part of the plan.”

Rotimi is officially set to appear in the highly anticipated House Party film remake via New Line and HBO Max. Below, the multi-platform star opens up to Billboard about his new album, and balancing his music and film careers.

How long have you been working on All or Nothing, and why is now the perfect time to release it?

I’ve been working on this album for a year and a half. Ever since COVID. Last February, I built a studio in my house and literally just locked myself in and recorded. I found out so many different sides of my musical ability and have been getting better and better. It was the first time I was ever able to focus on music for a long period of time because I’ve always been balancing the two, [acting and music]. For me it was like, ‘Go crazy. You got no excuses now, so go crazy. Do everything you said you wanted to do and create a project that people love.”


What made you feel “What to Do” and “Decide” would be the perfect lead singles?

I wanted to do something different that people hadn’t seen from me. “In My Bed” did what it needed to do, but that’s one side. Now I wanted to do something a little more mainstream with “What to Do” while simultaneously hitting you with some pure R & B. Now, you start seeing what I’m capable of doing, while I’m building the story out with the album from that point on. To open a new demographic of fans, “What to Do” felt like the right record to go with radio and get the ball rolling.

Why is it so important for you to show how diverse you are musically on your debut studio album?

It would be doing my talents justice. I don’t want to focus on one thing. I was able to show the range of what I can do, because I feel like people need to hear that type of music. People need a soundtrack to their life. I give that option and that possibility, for people to vibe and play any Rotimi song at any moment they feel.


All or Nothing is being released by Empire, who you signed with in 2018. How has your experience been working with the label?

I love it. It’s freedom. They believe in me. They’ve delivered on their end and I’ve continued to deliver on my end. All my numbers are consistently growing. I think it’s a great partnership and I feel like it’s the perfect situation for an artist.

Tell me about the album title, All or Nothing. How did you come up with it and what does it mean to you?

It’s how I feel about my situation. You gotta go hard or go home and we wanted to make something that I poured everything into. With the way we have it structured, the music, all of my talents and ideas it’s like, you might as well go crazy or don’t do it at all. Give everything you got.


You’ve released mixtapes and EPs, most recently The Beauty of Becoming and Walk with Me, both in 2019.

With All or Nothing being your debut studio album, do you feel more pressure for it to succeed?

It’s not pressure because I’m confident that we made music that people are gonna gravitate towards. But you know how serious things are now and you don’t take it for granted. You maximize every opportunity. I’m stepping into my time, so now it’s like, “Make sure you do what you need to do.” I’ll always do music — but basically, I’m betting on myself. I’m putting all my chips in and I can guarantee that I’ll win.

How would you measure the success of All or Nothing, personally?

That’s a great question. You have goals, the platinum single, top 100 Billboard [goals]. You want those things, but once you start seeing that people literally have favorites [of your] records, [it changes your perspective]. I’m hearing, ‘My favorite record is ‘I Do’ or ‘Weapons.’ Its beautiful because you know you’ve affected different people in different ways.

Speaking of favorites, what’s your favorite song on the album and favorite recording memory from the making of All or Nothing?

My favorite song changes every day, honestly. It depends on what mood I’m in. Today, my favorite is “Weapon” and yesterday it was “Memory Lane,” but that’s a testament to a really good project. I’m excited for people to hear it.

I think it was the camaraderie in the studio [that I remember most]. I have some of the best writers and producers in Atlanta, some even flew in from LA. The conversations that we were having to make the records, I’ll never forget that and how effortlessly it all came together from picking the beats, lyrics and melodies. Everybody chipped in. It was a cool, cool time.


Mario and Lucky Daye appear in the music video for “What to Do.” Did they do some of the songwriting on this album? Who are some of the other artists you worked with behind-the-scenes on this project.

So Mario and Lucky didn’t have anything to do with project, they’re my homeboys. Tank’s a part of it. On the deluxe, you’ll see that I have Busta Rhymes, Busy Signal, Yung Bleu, Fireboy DML, Alpha P, Ludacris — it’s a cool spectrum of different artists that do different things that kind of embodies my style.

How did you determine who would be perfect to team up with on your features?

If I could choose one, I think me and Drake or me and Rihanna would make something crazy.

[Laughs.] I didn’t ask your dream collaboration, but thank you for sharing! I did ask how did you determine who would be perfect for each song on All or Nothing.

These are all friends of mine, and their styles matched the specific records. I heard “Grown Decisions” and Tank is an OG so it made sense with an R&B record. With “Weapon,” I met Fireboy DML at an event and was like, “Yo, I got the perfect record for you, man.” Luda, because he has “Lovers and Friends” with [Lil Jon and] Usher — that reminds me of that. The Busta record is crazy, and reminds me of high energy New York. It was a lot of natural friendships and their sound matched the energy. 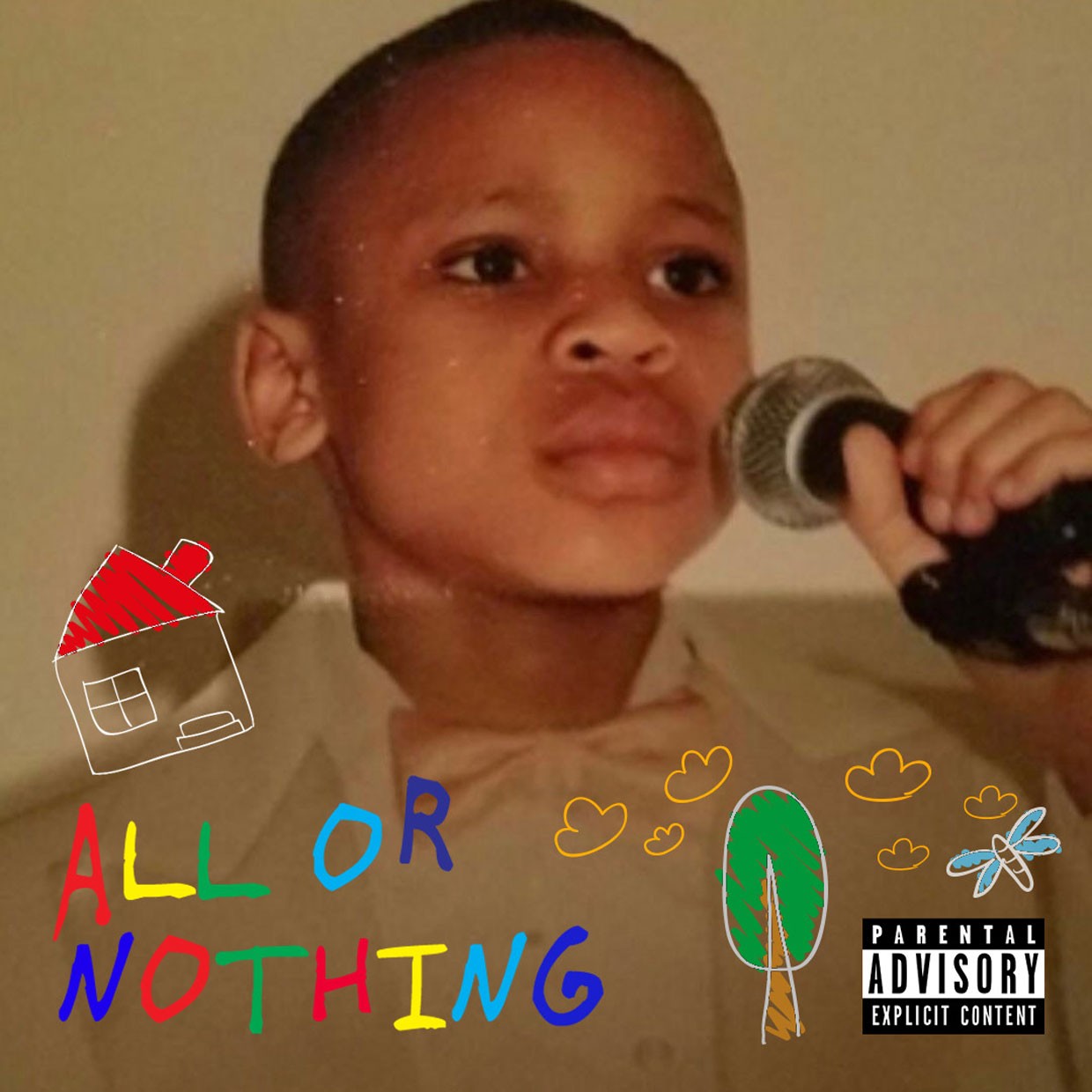 As a Nigerian with hits like “In My Bed” with Wale, how do you feel to see Afrobeats going so mainstream?

It’s beautiful, especially being a part of the movement. It’s cool to see how everybody’s embracing it. It’s the feel-good music that people need. The evolution of it is a beautiful, beautiful thing and I’m just playing my part and adding what I can add.

Is there a takeaway, message or vibe that you want fans to get when they listen to All or Nothing?

I think we made the music in this project for people to vibe with at any point in life. If you’re cleaning the house, going out, driving around listening to cool vibes or doing nasty things, I got a record for that. Whatever you want, you’re gonna get from this album. I’m so proud of it.

Tell me about the creative process behind the “Decide” music video. Did you conceptualize it? Can fans expect more music videos from this album?

Yes. It was my first time co-directing a video… I enjoyed it, being behind the scenes and in front of the camera, paying homage to Jay-Z with the dream sequence, with how nothing actually happened in the video, was cool. Jay-Z has a music video for “Excuse Me,” where he’s in an elevator and he had a dream that him and this girl had a whole life together and he realized it [was a daydream].

“Decide” is simple, old school, ‘90s R&B vibes and it’s a blessing to bring that to the world. They will be getting a music video for a record called “Don’t You Ever” and “I Do” in September-ish.


Did you pay homage to any other artists on this album?

No, I think everything is purely from what me and my team created. We tried to step away from any of that. I’m a fan of a lot of people, but we did our own thing on this one.

Congratulations on your role in the House Party remake, what can you tell me about your role?

I can’t say too much — but I can say it’s super funny and people are going to laugh their face off. It’s a cast of young, new actors who are hungry. When you have that, it always comes out really, really well — so I’m excited for people to see it.

Stream All or Nothing on music platforms and see the complete tracklisting below: