A US drone strike killed several Islamic State suicide bombers on their way to carry out a second attack on Kabul airport, in an apparent sign of uneasy security cooperation with the Taliban.

The strike hit a vehicle packed with explosives in a residential area of Kabul on Sunday, triggering a blast that could be heard across the city, US and Taliban officials said.


Nine civilians from one family, including six children, were killed in the strike, a witness told CNN.

A senior Taliban source told The Telegraph that the group “welcomed” the strike, in an indication of a reluctant alignment with the Biden administration over the threat posed by the Islamic State offshoot in Afghanistan known as IS-K.

In a significant concession to international pressure, the Taliban walked back a threat to close the borders after the US withdrawal.


Ninety countries including the United States and Britain said in a joint statement on Sunday that they had received assurances from the Taliban promising safe passage for Afghans who wished to leave the country after the airlift ends. 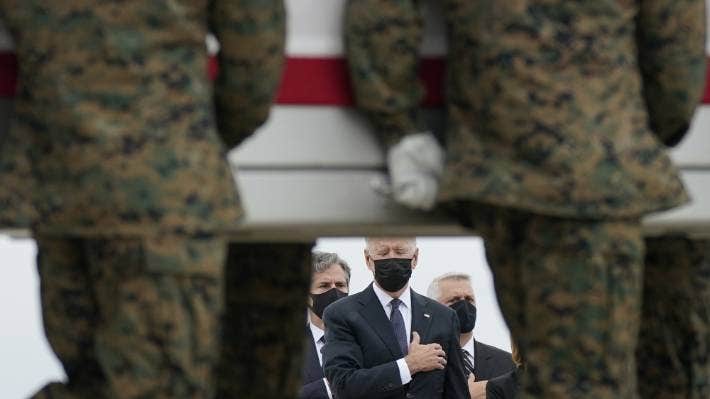 The last civilian evacuation flights were expected to leave by Sunday evening. A US military source said most troops would likely be withdrawn on Monday, leaving only a skeleton presence of US marines.

But a senior aide to US President Joe Biden said America planned to continue targeting members of IS-K after the August 31 withdrawal deadline for US troops.

US President Joe Biden “will stop at nothing to make IS-K pay,” said Jake Sullivan, the US national security adviser.

On Sunday, Biden and First Lady Jill Biden attended a ceremony for the American military victims at Dover Airport base in Delaware to receive the remains of 13 US servicemen killed in an IS-K suicide attack on crowds at Kabul airport’s Abbey Gate last week. At least 169 Afghans were also killed in the blast.

US Navy Captain Bill Urban, a military spokesman, said the strike was carried out in “self-defence”.

“We are confident we successfully hit the target,” Captain Urban said. “Significant secondary explosions from the vehicle indicated the presence of a substantial amount of explosive material.”

The Taliban confirmed the strike and said the attackers were on their way to Kabul airport when they were hit.

Sullivan said there was still time for the roughly 300 American citizens still awaiting evacuation to make it to the airport and be put on flights.

A Western official told Reuters that around 1000 civilians were at the airport awaiting flights on Sunday morning.