The Belgium midfielder rifled an unstoppable effort into the top corner from 25 yards, as Brendan Rodgers’ Foxes put another genuine stamp on years of recent quality.


Former Leicester full-back Ben Chilwell saw a last-gasp Chelsea effort ruled out for offside after a video assistant referee review, while Kasper Schmeichel earlier made a superb save to deny Mason Mount.

Leicester’s Premier League title win of 2015 might have come against all possible odds, but the east Midlands men have never since wilted.

The Foxes were contesting just their first FA Cup final since 1969, when the Beatles were number one with Get Back and Neil Young’s goal sunk the hopeful Foxes – and an eight-year-old Gary Lineker cried all the way home on the train.

The only tears of Leicester blue this time out were of joy and relief however, as Rodgers’ men capitalised on Chelsea’s toothless final-third play.

Chelsea’s second FA Cup final defeat in as many years will now put a major squeeze on the end of the Blues’ season. 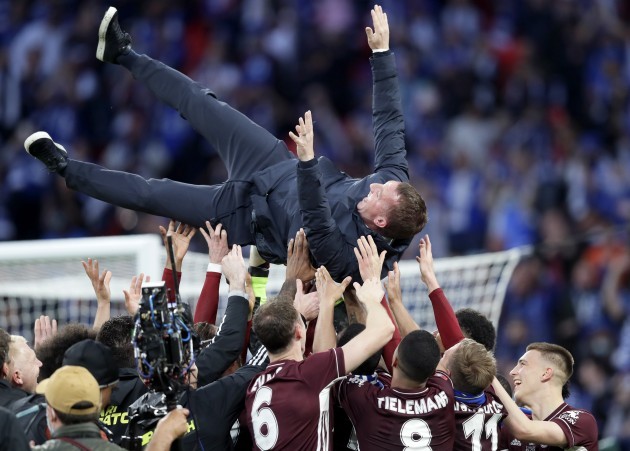 The Champions League final against Premier League champions Manchester City on 29 May in Portugal must now seem an age away for Tuchel and his luckless Blues.


And for the likes of Mason Mount and Reece James, two FA Cup final losses in succession will be a bitter pill after such a resurgent second-half to this campaign.

A number of fans booed the players for taking the knee before kick-off, though the anti-racism gesture also received warm applause.

A video of Singer, Portable hypes himself as he steps out in suit for the first time