Floods of death, destruction in Nairobi

In Katwekera, Kibra constituency, a boda-boda and his two passengers were swept off a bridge while crossing River Nairobi.
Witnesses said the rider insisted on crossing the bridge despite warnings from locals.

Three men have been confirmed dead and property valued at millions of shillings destroyed in Nairobi following a downpour on Thursday night.

In Katwekera, Kibra constituency, a boda-boda and his two passengers were swept off a bridge while crossing River Nairobi.

Witnesses said the rider insisted on crossing the bridge despite warnings from locals.

The bodies of the driver and one of his passengers – identified as David Otieno – were found about a kilometre and a half away from the bridge yesterday.

“One could not see the road as the river had burst its banks. There was water everywhere,” Otieno’s friend Erick Ojwang, said.

“Drainage in this area is bad. It has just rained for a day. Imagine what will happen if it pours continuously for two weeks.”

The motorcycle and the body of the other passengers have not been found.

Hundreds of shacks near Kibra South dispensary were destroyed by the rains.

Families attempted to salvage their property from what was left of their homes yesterday. 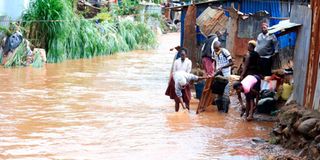 Mr Pascal Odhiambo, who has lived in Katwekera for seven years, said he has never witnessed such rain. His house was barely two metres from the banks of the river.


He lost most of his property, including electronics and food.

“There have been rains before but not on such a scale. The contractor working on the Kamukunji-Lindi road is to blame. These culverts block the river, pushing water to people’s homes,” Mr Odhiambo told the Saturday Nation.

Just metres away, Mr Boniface Kiprono, 30, stood crestfallen. His house was destroyed by the rain that hit the area from 6pm to 11 pm.

“The national and county governments need to improve the drainage system in Katwekera. People are scared whenever they hear raindrops on their roofs,” Mr Kiprono said. 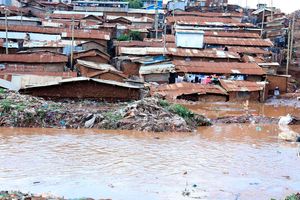 Next to his destroyed house is Kibera Hope Gospel Church, which was almost submerged. Bishop James Isye, who has lived in the area for 15 years, expressed frustration.

Like Mr Odhiambo, he said he had never witnessed such destruction before.

“The planners of this area are to blame. They forgot to put up sewer lines. Children have died and grown ups have been seriously injured because of the poor drainage,” the bishop said.

His house, just 50 metres from the church, was destroyed.

In late 2018, Mr Ojwang’s neighbour died as he attempted to save his three-year-old daughter from drowning. He and the girl were carried away by the rain water.

His body was found three weeks later but the child is still missing.
Washed away by the rain

Further into Lindi ward, 22-year-old Eveline Anyango used wet sand and soil in an attempt to repair the floor of her house yesterday.

“I cannot wait for anybody to do this for me. I need to fix it fast and hope it will have dried up before the rains come,” she said.


About 100 metres from her house is Seokang Ltd, a company building roads in Kibra.

The iron sheets surrounding the site were washed away by the rain the previous night.

The company’s makeshift container office was not spared. Unlike the surrounding houses that were damaged by the floods, it was vandalised by youths.

“It is possible the items were stolen by some of our workers. We also lost three spades, two mattocks and 30 litres of diesel,” Seokang Ltd official Barrack Amolo said.

Sixty eight-year-old George Ouma was on the verge of tears. He has lost 23 rental houses in Katwekera in just three months.

His 14 houses were pulled down by the road contractor in February. When the rains came on Tuesday, nine more houses were destroyed.

Not far away, a wall at Laikipia Gardens in Kileleshwa, collapsed on six vehicles. It happened at 9pm, according to a resident.